A brother and sister’s journey together 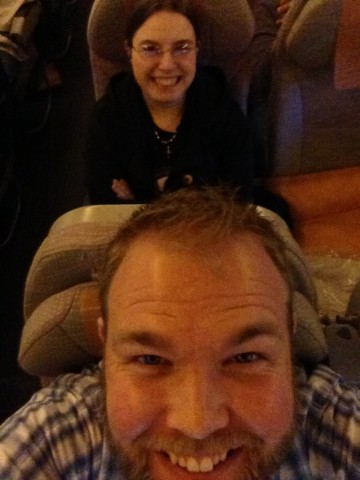 Circa one year ago today my sister, RaeAnn, and I boarded an airplane to fly nearly 20 hours and halfway around the planet to visit a people we did not know and had never met. Little did we know that shortly after touching down at the Entebbe International Airport in Uganda that the course of our lives would be changed.

Anyone who followed my blog during that first trip knows that for many years prior to going I felt called to the peoples of Uganda. During the very first trip planning team meeting Joanne Ramos told us about the people we were going to serve and how we would be serving them. By the end of that first meeting I had a passion burning inside of me that felt like a raging bonfire. It could not be stopped and it would not be satisfied until I got to Uganda.

On the way home from that meeting I spoke to my sister. RaeAnn had be traveling to a community in El Salvador often since she was a teenager, in fact she had a trip planned just a couple months after that meeting. In my excitement I said she should come to Uganda with me. Her response was to say that she did not have enough money or vacation time to do both trip. I jokingly responded that if God wants it to happen it will happen. Imagine my surprise when a few days later she told me she signed up! To go on a trip with people she did not know to a foreign land she knew nothing about. I am sure glad she did though :D.

Our time in Uganda was mind blowing and life changing. We were able to blog nearly daily and you can read about it at:
My website https://ben.lobaugh.net/uganda
RaeAnn’s website http://raeann.lobaugh.us/

By the end of the trip RaeAnn and I had fallen hopelessly in love with the Ugandan people. That passion I had during the meeting has not abated, and RaeAnn had caught it.

I wrote a post titled Do not cry little one which was a call to action. A call to join with my sister and me to change lives in Uganda. Both RaeAnn and I have been faithful to that call and today our family currently supports 4 children in Destiny Orphanage and 1 Destiny graduate currently attending university (Hopefully soon to be one more!). You also have been faithful and changed lives and are continuing to change lives.

Today I happily sent my sister off. She is currently on an airplane 1 hour into her 20 hours of travel. Tomorrow she will debark the plane to happy smiling brown faces greeting her with enthusiasm and excitement. Momma Esther will have a party ready and waiting at the house for their arrival. Relationships built and maintained over the years and 4 trips will be rekindled, children’s lives will forever be changed for the better, and families will be healed. Though I was not able to join her this time I am proud of my sister and the legacy she carries over there. I am excited to hear stories from and about the people I now know and love and to learn about new people I will soon know and love.

Thank you for going on this journey with me RaeAnn. I am proud of you and inspired by the passion for people around the world burning in your heart. May your trip be blessed and many lives touched.