I grew up with a wood stove for heat. I love fireplaces! This house has two!

The upstairs fireplace is an open face monster. Way different than a wood stove. The first I fired it I walked outside to check the chimney. Lots of sparks were flying out the top. Not desiring to burn down my neighborhood, the fire was put out and I called the great folks at Pristinr Sweeps to come take a look.

Aaron, the owner, glanced into the fireplace and let out a gasp as hit eyes travelled up the rear, to the chimney opening. He said it was one of the dirtiest chimneys he had seen! Aaron set to work and spent a lot of time cleaning. Then went onto the roof to inspect the brick and masonry. The damper was rusted out, and there was no cap on top to arrest sparks. The previous owner had a cap built to cover the three flues, however those can be problematic as smoke builds up in them. If one chimney is exhausting and the other is cold it is possible to have a down draft and suck all that back into the house. I had a new damper and cap for the upper fireplace flue installed.

The second fireplace is downstairs and has a wood stove insert in it. Aaron took one look at it and said he would not be able to work on it as the insert was not legal. Further inspection revealed it was incorrectly installed and did not have proper ventilation or exhaust. Whoah, there were no plans to use it, but I sure am glad I had it looked at and learned that!

I am happily sitting in the living room, enjoying the smell and crackle on a satisfying fire.

reminder, have your chimney inspected yearly. Junk can build up inside and cause a chimney fire. That will ruin your day pretty quick!

Last night, as she prepped a room for painting, Alix learned the fine art of patching holes in drywall. Pretty in pink! 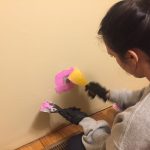 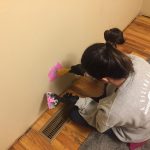 A couple weeks ago I noticed the kitchen sink seemed to be draining slowly. It has a garbage disposal and I figured the previous owner had left something in there without chopping it up. I flipped on the disposal switch, instead of a satisfying grinding noise all I heard was a low hum, then a pop and acrid smoke filled the room. The disposal had given up the ghost.

Now I had a non-draining sink and a bad garbage disposal. I was already working on the floors and did not have time to worry about the sink, so it sat, for a week, half full of water. Boy did it stink when I finally got a hose to siphon the water out.

The city of Burien has a strong composting policy, in fact they require you to compost and provide a second bin in the driveway, next to the garbage can, just for compost. So I ripped the disposal out, removed the sink drain, and re-plumbed it all into a straight drain. Food scraps go in the compost, not the sink. Simpler, less moving pieces to break, and one less potential fire hazard in an already overloaded electrical system. 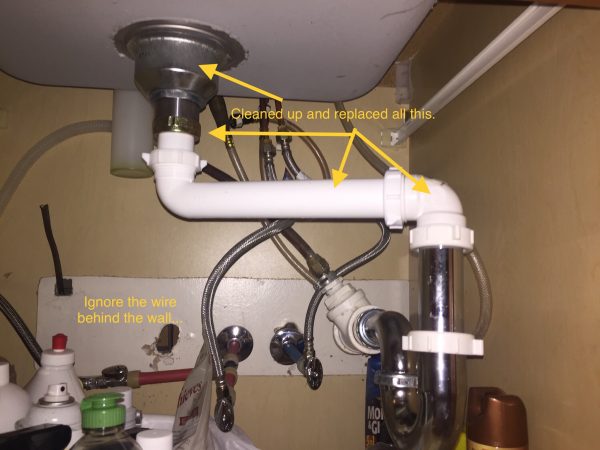 Don’t be this outlet! Use sane electrical wiring practices

Wiring on a house from the 1950s should never be expected to be top notch, however this outlet really blew my mind…

There have been several electrical revolutions since the 1950s. This house is a testament to each era in wiring style, and overall safety. I have been tracing wires through the unfinished basement and think I may have a permanent bruise from slapping my forehead in amazement and disgust. Being able to see and trace all the wires is a blessing and curse. I wish I could be happily ignorant of the fire and safety hazards the wiring this house has, but now that I know I have to fix it. Electrical loads in the 1950s were much less than they are today. The current electrical system cannot pretend to keep up with modern demands.

Take this outlet for example, everything seems ok from the outside. It is a two prong outlet. I wanted to see if there was a ground wire, since a few other outlets have them. As I pulled it open a sinking feeling spread over me. Something in here did not look right. A power outlet should not have a bundle of wires twisted together in its box.

When I disconnected the wires to see what else was on the circuit I almost fell over. Not from electrical shock, but dumbfounded shock! That outlet was powering:

That is quite the list on one circuit! Literally covers the entire house. The breaker may as well be a secondary main.

Don’t be this outlet…