Scotch on the rocks 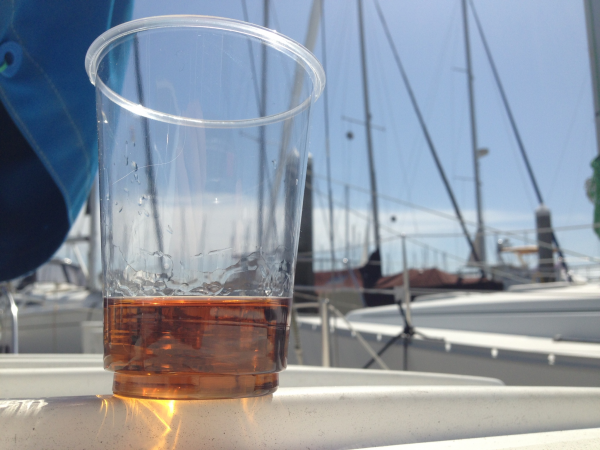 Last year a good friend, Mike Karikas, moved to Orange County right as I was coming back to Seattle. This week he is in Seattle working with his colleagues and asked if I would be interested in taking him and some co-workers out for a sail after work. Of course I said yes!

The weather was dreary, but it was not cold or rainy so we cast off after 5:30pm. After being baffled by a closed fuel dock we headed towards open water. The wind was blowing just perfect for a waterfront sail along the front of Seattle. I had not taken this route before and was rather excited to try it out as I have seen many boats sailing along the front of the park.

The plan was to cruise down near the Seattle Aquarium and then head back to the marina for dinner. Mike’s coworker John had brought along a bottle of scotch and poured the five of us a glass. Mike, having enjoyed time on his parent’s sailboat, was at the helm and we were moving along quite well and having a great time. I received a phone call some time after 7:30pm from a co-worker and decided I needed to take it. Up on deck it was noisy so I ducked into the cabin for some peace. After about a five minute phone conversation I popped back topside to discover us quite close to the rocks, or rather gigantic terrifying boulders in front of the park. Mike wanted to get in close and close in he got! 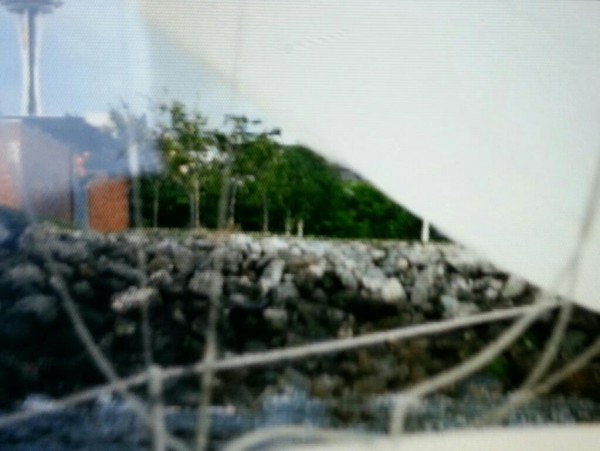 I grabbed the tiller from Mike and attempted to get us back out in open water, but unfortunately the surf had grabbed ahold of Zippey stronger than the wind and we were moving sideways toward the rocks! I reeled in the sheets to get every ounce of power out of the sails to no avail. Fairly confident now that we would hit the rocks I had Mike grab the boat pole and attempt to hold us off the rocks. To his credit he did a darn good job, but we still ground against them a couple times.

As Mike was trying to hold us off the rocks I yanked on the starter cord for the Yamaha outboard. This motor is beautiful and always starts first pull but no surprise the cord stuck this time. I had forgotten to take it out of gear! Precious seconds were lost while trying to get the motor started. Vrooom! The motor fired up and I slammed it into reverse. The prop and shaft came flying out of the water! Dagnabit, the motor had not locked down on the mount. John, a coworker, tried valiantly to hold the motor down, but it wound up flipping sideways and pulling us toward the rocks even quicker. Oops.

I idled the motor and hopped up to douse the sails. That slowed our impact and grinding on the rocks quite a bit. After walking to the bow and assessing the situation with Mike I decided there was no other option than to jump into the water and try to manhandle Zippey away from the rocks. I was not at all confident about this but it was better than the not options we had. I hopped near waist deep onto the rocks and somehow managed to get the boat pointed straight away from the shore. I was quite impressed by this as the wind and waves were battling me.

As Zippey was coming around I instructed Mike to walk back to the motor and prepare to open the throttle wide. I knew we were going to have inches to spare after I turned the boat, with the wind and waves pushing us straight back to shore. I was not at all sure I would be able to get back onboard before he did that, but as the boat came around I had her off the rocks far enough that I hazarded pouncing onto the motor mount and vaulting into the cockpit. As I did this I grabbed the throttle on the motor and opened her wide. The motor was still in reverse! With less than two feet separating the prop from the rocks I did a bad thing. There was not enough time to switch down to idle to change from reverse to forward gears. I slapped the shifter hard in forward. With nary a hiccup we rocketed forward like the wind and waves were not there. Victory!

After traveling several hundred feet from shore the girls came back out to the cockpit and everyone picked up their scotch glasses. Mike looked at his glass and regarded me for a moment. Seeing that I was not too upset he raised his glass and said, “Ben, you should know I like to drink my scotch on the rocks!”

After much laughter we checked the time and headed back towards the marina. Mike played some sea shanties on his Uke and we were all feeling pretty good.

I am happy to report that other than some scraped paint and bruised egos both Zippey and the passengers sustained no damage. It sure was a learning experience for me though.  Mike + neat scotch + boat + rocks nearby == &&#*$*(%(%($*