The last log entry noted that I had purchased a new motor for Zippey. I am happy to say that one week later I had a chance to clean up the boat, mount the motor, and take Zippey out for her first sail of the year.

Interesting note: Upon arrival at the marina I noticed a rather large and expensive powerboat floating freely in the guest dock area. The dock lines were hanging in the water so she must have come loose in the heavy winds the previous day. I was just barely able to get my boat hook around one of the deck stanchions and pull her back into the dock. Tied her down nice and good and reported the incident to the marina office. I got a call from them about an hour later. Turns out that after looking the boat up with the Coast Guard it was found to have been stolen three days prior from Lake Union. Apparently the thieves took a joy ride to the Bremerton Marina where they ditched the boat. 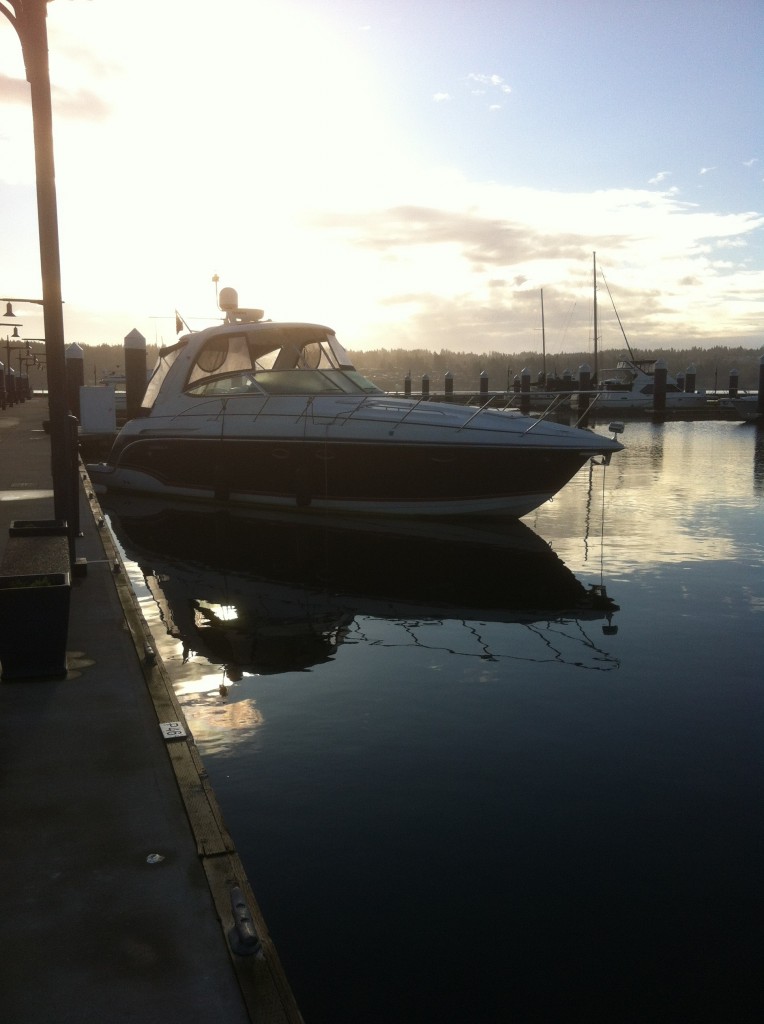 Back to Zippey. Due to economic and life circumstances it has been just slightly over one year since Zippey has been out of the marina. In that time ( not logged 🙁 ) Zippey has had her own adventures. She encountered storms that ripped away hatches and drenched the interior, and another storm that forced water up under the drop boards and inundated her with about 500 gallons of water, and again soaked the interior.  I had pulled most of the interior out for drying and mold prevention, and had started the installation of a new automatic bilge pump ( previously it was manual or nothing ), so the cabin was a pretty good wreck. After taking a couple hours to put everything back together my roommate Alcane helped me mount the 1994 Yamaha 2-stroke 8 hp motor to the transom. The fuel mixture was 50:1, which Alcane had found online, however the motor had a label on it of 100:1. The off mixture did not seem to cause any issues.

I love this motor! Fired on the first pull. That is fantastic! When in forward a cool jet comes out of the middle of the propeller and creates a neat looking streak behind the boat. Anyways, the motor worked great. The only issue I had with it is that it does not tilt up very far, so on a port tack the prop sits in the water and causes a small amount of drag. 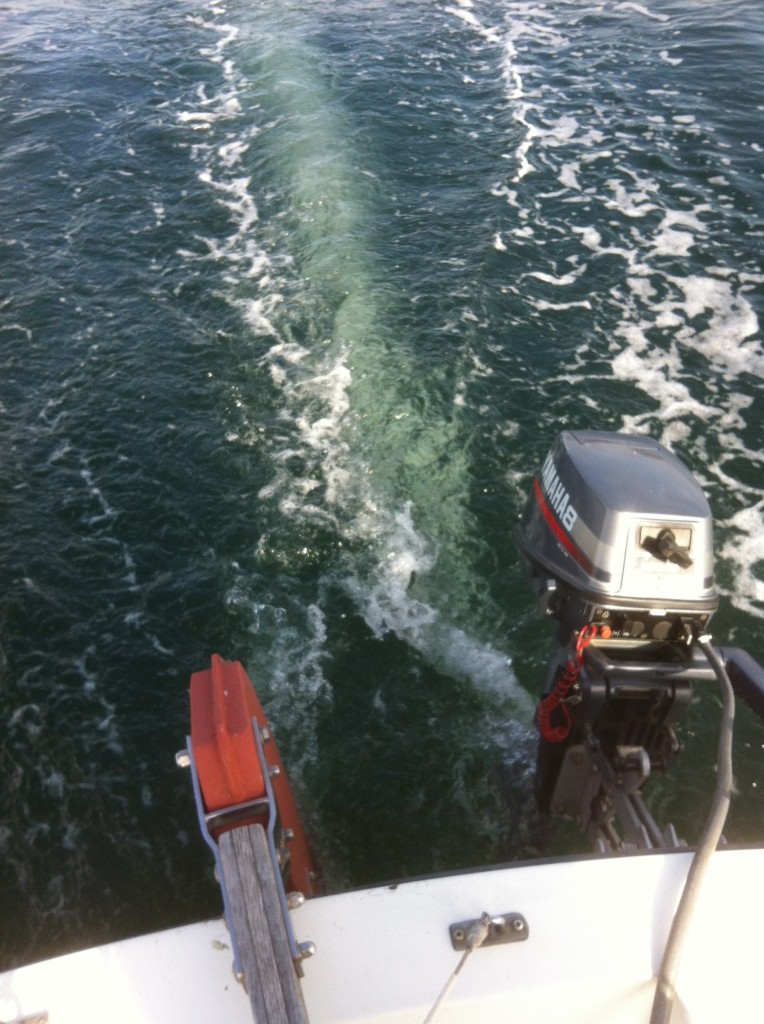 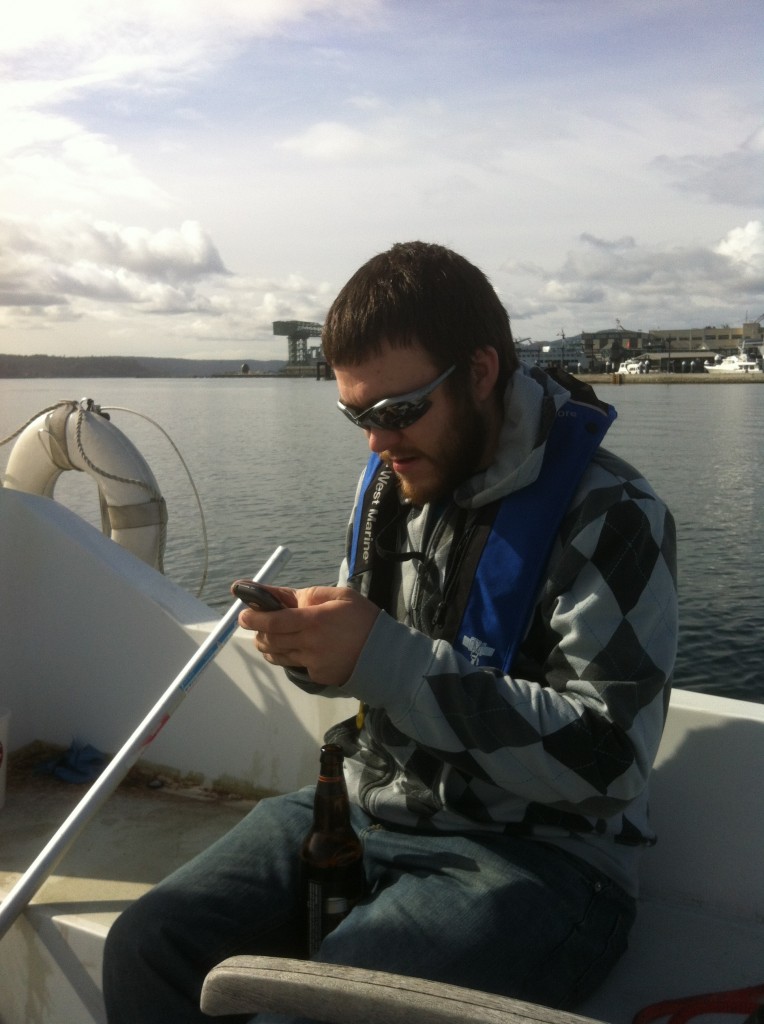 When we initially cast off there had not been any wind, due to that I had not yet rigged the sails so we could get out on the water faster. I handed the till to Alcane and told him to have fun while I mounted the main into the boom track. By the time I had the main installed there was a whisper of wind, but enough to push the boat forward. I hoisted the main, turned off the motor and told Alcane to make the main look as much like a frito dip chip as he could and then went forward with the 130% genoa to hank onto the forestay. Alcane did a pretty good job. He has a technical mind so he caught on quickly. After hanking on the genoa I did not hoist it. Instead I went back to the cockpit and taught Alcane some sailing theory. A bit later when I hoisted the head sail I showed him how the sheets work and the general idea behind the two sails working together. Again he picked this up fairly quickly and soon we were making very good headway. 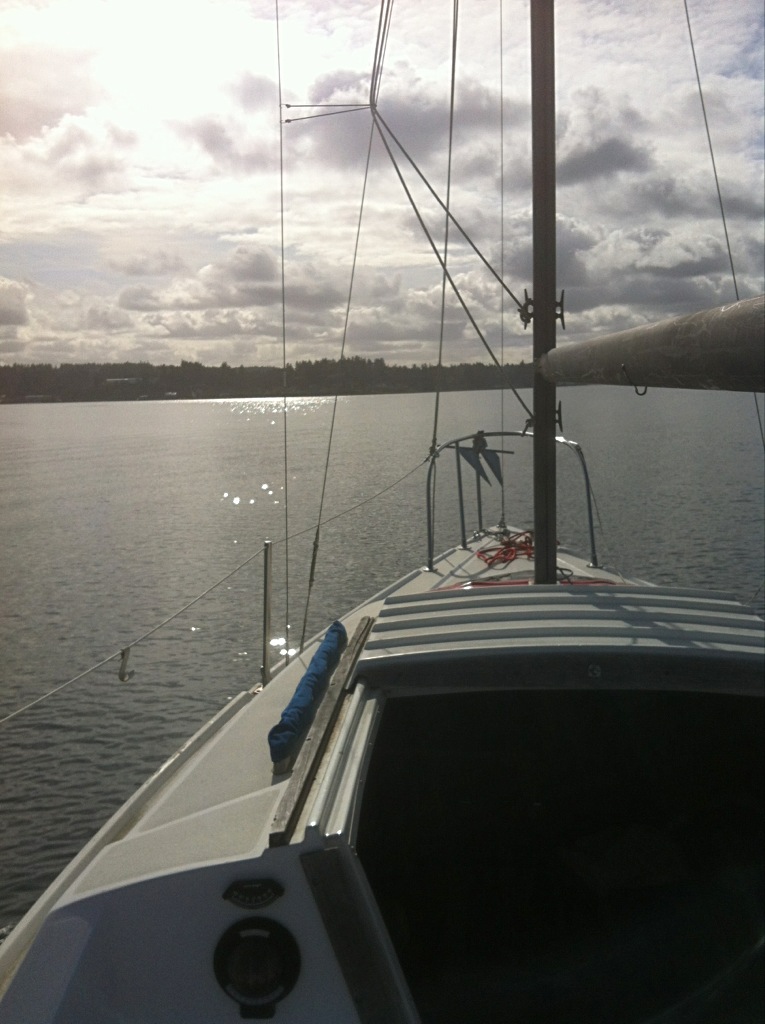 Around 1430 Stephen Hollingsworth, and old work colleague, gave a call and we picked him up for a sail. Stephen is very excited about sailing and took over the tiller almost as soon as he came on-board. Stephen is a good pilot and communicated very well with Alcane on what we wanted the boat to do and how to accomplish it. I stood in the cabin entryway as Alcane handled the sheets. While Alcane usually did not have the genoa sheeted most optimally, for his first time out and not having a feel for sailing he did a dang good job. Stephen then taught him how to handle the sheets while both tacking and gybing.

We returned to the marina berth around 1700. It was a great day of sailing, winds were low and stable, perfect for a newbie, and the sky was clear and blue. I am very happy about the performance of the new motor, however the genoa is falling apart and will need to be replaced sometime this season before big holes are blown through it.

I am looking forward to another awesome year of sailing!