I received a text a couple weeks ago from a dear lady who lives on her beautiful sailboat in the marina my boat is moored in. She attached a pic asking if my bow seemed low. Indeed it did. As it turned out when I was there a few days prior I had moved some stuff around the cabin which shifted more weight to the bow. During a several day rainstorm this weight shift caused water to pool on my exterior companionway step. When the water reached the height of the slats closing the companion way it spilled inside and into the sink. Unfortunately the sink was clogged and after it filled the water spilled over into the interior. It soaked all my berths and carpet. My friend Mike, who lives on a beautiful 49 foot sailboat, was nice enough to take a look for me. There was 5 inches of water in the cabin! Keep in mind this is *past* the bilge, so in actuality there was more than a foot of water in my boat. Mike siphoned the water from the cabin and most of the bilge and stabilized the boat for me.

For some strange reason my boat did not come equipped with a bilge pump to take care of water build up. Today Mike guided me through what I needed to install the system. I was expecting it to take only a couple hours. HA! I started working on it at 11 am and stopped, unfinished, around 4 pm. After draining the bilge and trying it to the best of my ability I setup the bilge pump holder with epoxy and stuck it on the bottom of the bilge. Turns out that epoxy had sat too long and was bad. It did not hold. Next I tried some JB Weld. That sucked up some of the remaining moisture and did not harden. Both of these epoxies I let sit for about 45 minutes each. While they were attempting to harden I ran all the electrical and hoses. 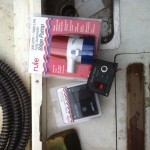 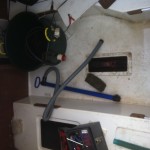 I was unable to complete the install today. I left a heater blowing down into the bilge to dry the rest out. Hopefully next weekend it will be dry enough for the epoxy to set properly. I finally made it home around 5:30 pm, wet, cold, hungry, and smelling of stagnant bilge water ( I smelled like a sewer ). It was a very interesting day, groping around the innards of Zippey