It was a blustery and rainy kind of day. Winds at 15 mph with gusts of 26 mph according to the on land weather stations. Into this went five intrepid sailors on a 24 foot boat…

Actually, the weather was perfect for us sailboat racers. We are a bit of a crazy lot. Our skipper, Heather, picked up a bright yellow San Juan 24 named TaTonka near the end of summer and this was her entry into the racing scene.

Armed with five racers on the boat we decided to deploy the 152 genoa. I was flying the main loose with the genoa driving, and overpowering, the boat. Since we had probably 70 years worth of racing experience on the boat we thought we could handle it but it was sure a handful.

As we jockeyed for position with the other boats coming up to the start line I heard a snap and turned to see Heather staring at a length of broken tiller she was holding in her hands. We had no steerage and with the strong gusty conditions and an already overpowered boat we were are risk of becoming wildly out of control and endangering other boats. What happened next was accomplished so quickly that the writing of the paragraph took longer!

When I turned and saw Heather holding the broken tiller thoughts of all the bad outcomes flashed quickly through my head along with possible solutions to avoid them. We needed to get under control FAST! I cried out, “BLOW THE SAILS!” as I ripped the mainsheet out of its jam cleat. Our illustrious genoa trimmer reacted just as quickly as me by blowing off the genoa sheet. He then hopped over to the stub of a tiller remaining and tried to manhandle us into submission. Heather leaned over the stern and dropped the outboard motor into the water.

After blowing the mainsheet I hunted for the halyards holding the sails aloft. By the time I found them and ripped them out of their jam cleats the other two crew members who had been ballasting the boat on the cabin top were in position to yank the sails down as quickly as possible. They too saw what had happened and positioned themselves to quickly control the situation.

As the sails fell to the deck I was able to look up and around us to the other boats in the fleet. Amazingly we did not endanger or even come close to fouling up any other boats starting with us! From the time the tiller broke to when we had the boat under control and were motoring away from the fleet it could not have been much more than 30 seconds! It really pays to have an experienced racing crew onboard.

We were standing there looking at each other in amazement of what just happened as we slowly motored back to Tatonka’s slip when Heather said, “I have a spare tiller in the cabin.” I looked at another crew member who just said, “Find it!” I found replacement tiller and tossed it out onto the cockpit. Sensing success he also  instructed the other crewmen to swap out the headsail to the 100% jib while I was searching for a toolbox. We had the tiller and headsail changed out in no time and turned around to get back into the race!

We slid across the start line amidst cheers at our amazing turn of events. My watch said we missed the start by seven minutes. That is a significant amount of time to make up.

As we swept around the race course we attempted to identify our competitors and inch up on them. We may have been seven minutes late to start but we were amped up at this point and ready to take on the world. The wind strengthened and died out, the rain came and went in varying degrees but we never stopped pushing ourselves and the boat.

We crossed through the finish line feeling good about ourselves because we passed one boat. It was a slow cruiser but we did not care. Seven minutes late and we passed someone! After putting the boat to bed we joined the other racers to learn the results.

That means we caught and passed 7 other racers out there!

Fantastic accomplishments when you consider we:

Oh, and not only was this Tatonka’s introduction to racing with Heather as owner it was also Heather’s first time helming in a race, ever. 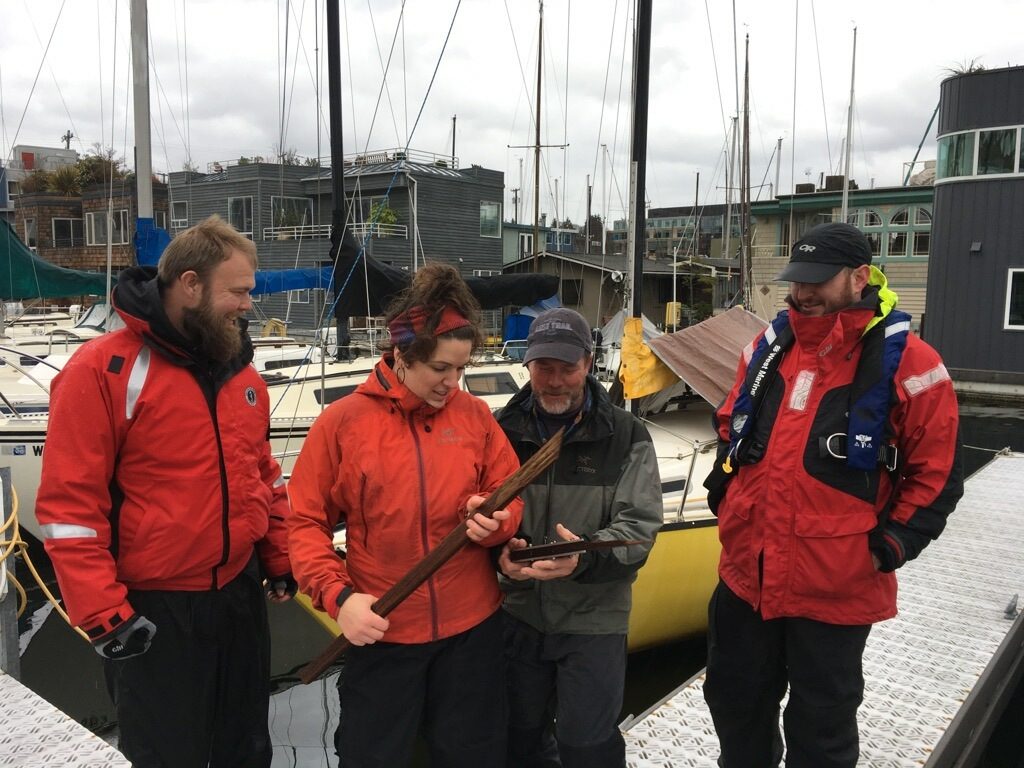 The fearless crew of TaTonka 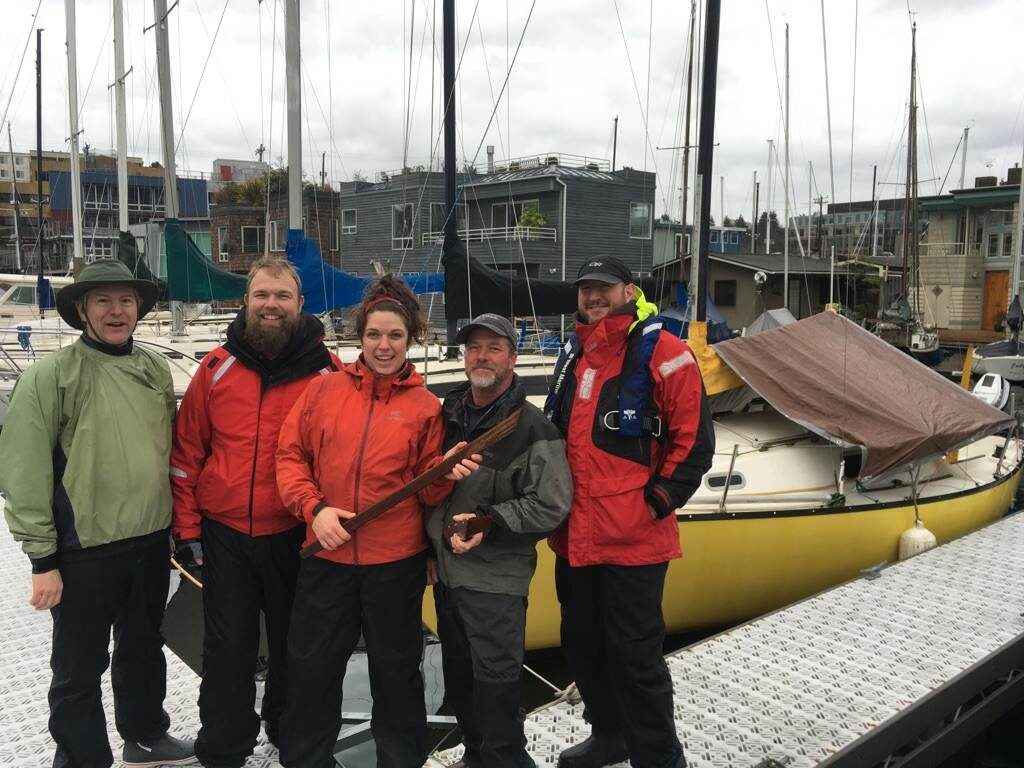 I promise the old green guy is a lot younger than he looks ;). Camera perspective