*Found this post sitting in the hopper from a couple days ago. Whoops. Looks like I never finished it. Now I never will ;)*

Last night we got home around 10pm. This morning we got up at 3:30 am to head towards the Nile river. I of course stayed up late to write a blog post and an email so I did not start my nap till after 11:30pm.

The drive takes 7 hours with good traffic and no stops. I am writing this portion as we are driving and so far it has not been perfect.

Roads in Uganda are terrible, but our awesome driver Henry is doing a fantastic job of keeping us comfortable. Henry has been one of our drivers for several days now. Earlier on the trip Henry shared his testimony and desires for the future. He has two kids and hopes to find a new wife to be their mother after the last one left 9 years ago.

After a couple hours of driving we hit construction. It was bad. We were stopped for nearly an hour. Luckily we stopped next to a market and had some entertainment. The locals took pictures of us through the windows and we sung songs back to them. There were some huge cranes (birds) there too. They stood above waist level and had massive scary looking beaks. They were definitely not afraid of the humans and mixed with them.

We got moving again and the concrete ended. My van is third in line and there was also lots of traffic. The dust that was kicked up was incredible. It was like driving through a thick red fog. It felt like we drove through that for another hour but it was probably much shorter. 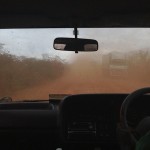 This route has taken us far away from the city. This is more what I expected to see, groups of clustered mud huts with grass roofs. But not a lot of them. Most of the buildings are brick or concrete. There are many small towns scattered down the road. It reminds me a lot of home, on long road trips driving by scattered houses and periodic towns. 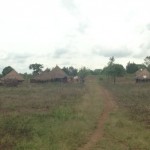 Do not cry little one