Uganda is hot! Between the temperature in the 80s F and the humidity in the mid 80% range the energy is sucked out of your body, even if you are not doing anything. We have been up early and working hard till late in the evening, then returning to the house and passing out. Needless to say energy levels are not running at 100%. Because we knew how exhausted most of us would be we decided to plan a safari in the middle of the trip to recharge and to enjoy a place that will be the first and last visit for most of us. The safari is 3 days, but most of 2 of the days are spent driving to and from the Nile river. To everyone who supported this trip financially, the safari money did not come out of the $3,000 that was fund raised. The safari was paid for by each of us individually.

We woke up and were scheduled to be on the road at 4:30am. We arrived at the lodge at 1pm. It was a loooong drive. I thought I would be able to get a blog post, some emails, and reading in but nobody in my van slept as I assumed they would. Instead we had a great and very intentional bonding time.

After that long drive we were greeted almost at the front door by a beautiful elephant! 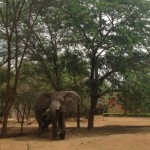 The lodge overlooked the Nile and there were Hippos in the water. 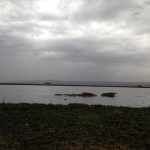 We played in the pool till dinner and it was incredibly refreshing.

Someone asked me about the Lord’s Resistance Army (LRA). I have not seen any evidence of the LRA in Uganda yet. One of the guides told me that the reserve we were in used to be part of an LRA camp. They had started shooting the animals so the animals migrated to another area of the reserve. As it turns out the elephant that greeted us had just come back to the area after a couple years away. It was a great greeting.

We relaxed and played in the pool for the rest of the evening. After being in go-go-go mode for a week on the trip, and a couple weeks prior, it was great to chillax for an afternoon.

Tomorrow we are heading to the other side of the reserve where the animals are supposedly the largest in numbers. I am excited! The guides told me they do not think I can ride an elephant but I am still hopeful!