(Quick note for you grammar sticklers: When I write personal pieces I do not care ;). You may find some short chunky sentences that are not “correct”. Too bad, this is my site 😛 )

And we are off! The team gathered at 2 PM at the Seatac airport in Seattle today. Other than a highly suspicious bottle of bug spray in Irina’s (AKA The Princess) bag the trip through security with over a dozen people was smooth.

We had an hour wait in the terminal. Everyone was in jovial spirits. I picked up a new Clive Cussler book and JB reminded me of my lack of brain power in not bringing sunglasses to the desert with me…. Do’h! Quickly remedied.

I have been on a lot of flights over the past few years, probably 30 in the last year alone and being a bigger guy ( hey now! Stop stereotyping! I am mostly trim, just have broad shoulders, a big chest, and tall. ) I am always worried about the seating arrangements on flights. This is my first time on Emirates and so far I am pleased. Partially because the 3 seats next to me are empty so I can stretch out, but really it is not too bad. Leg room is not optimal but it is decent. And the in flight entertainment system is amazing! 1200 movies and tv shows to choose from, in headrest gaming system that can do multiplayer with other passengers, and a inter-seat phone system. It is pretty great. Now if they would only get some wifi up in here.

The flight was originally scheduled for 15 hours I thought, however the awesome in flight says a little over 13 hours. Not complaining!

There are two cameras on the airplane, one points straight ahead and the other down. Pretty cool idea! I managed to capture takeoff. The video is pretty shakey, sorry about that. Maybe it is because I was trying to film, but it seemed to be the bumpiest takeoff I have experienced.

VIDEO OF TAKEOFF – To be posted later

Somehow the group is not next to each other but in a line down the aisles. My sister is behind me! 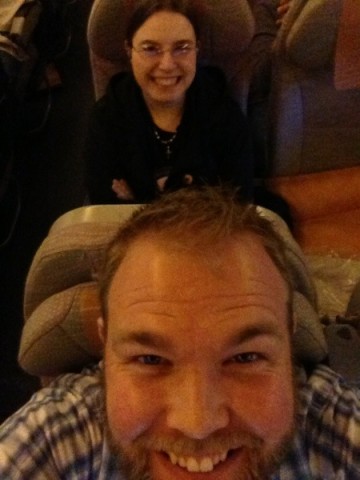 Emirates serves an amazing dinner! Usually meals on planes are disgusting. I typically do not eat on flights, or pack my own, but the food Emirates served was absolutely fantastic! Grilled chicken with garlic mashed potatoes and lots of other goodies. 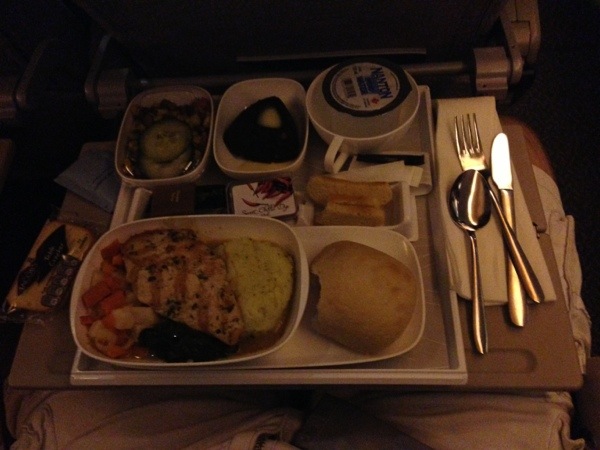 There is a goofy song about following the sun but I did the reverse! This plane flew across the night towards the rising sun. And what a sunrise it was! Looking out the port side window over the wing I beheld a glorious sight. We are currently 7 hours 50 minutes from our layover in Dubai. Altitude 53k feet and the temp outside the plane is -66C! 4350 miles to our first destination. From there we have a few hours to “rest”, which really means hitting the town and checking out the sights. 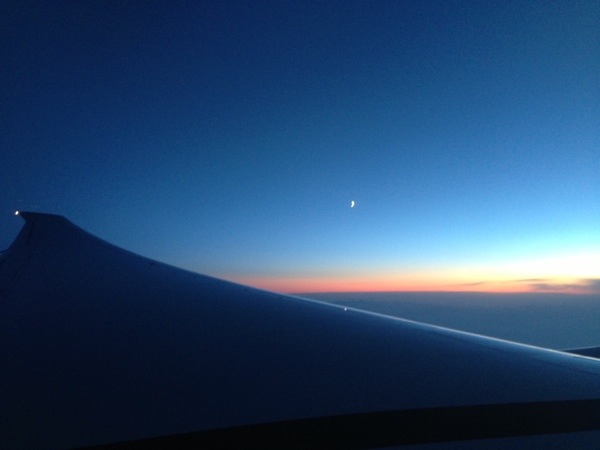 We left around 5pm Seattle time and have been in the air since. It is now 2am Seattle time, 2pm Dubai time. I started watching a tv show called Under the Dome. It is about a small town that had a dome suddenly dropped over it. The dome is completely impenetrable. It is getting hot on this airplane. A bit over 5 hours left on the flight…
—-
We landed at about 7am Seattle time, 7pm Dubai time. We have a brief hotel stay before hopping back on the airplane. It is take us about an hour to get to the hotel, and then we have to be back on the road again at 5:30am Dubai time. I have been awake all but 40 minutes of this trip. My body’s internal clock is going through a hard forced reset. Going to pass out at the hotel…