ZDD: Haul out for refit and painting

I have owned zzZippety Doo Dah for about 6 months now and absolutely love this boat. Unfortunately the previous owner did not take good care of her and I knew I had to do a haul out soon after buying her to get everything checked out and the paint fixed. This month I did just that. The following is a photo log of my first adventure hauling out a sailboat for maintenance. 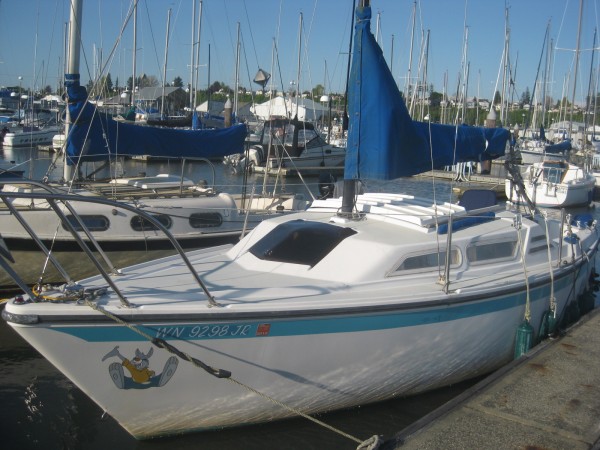 Captain Mike and First Mate MJ provided the transportation to Port Townsend. I felt much more comfortable with a macho Ford F350 towing Zippy rather than my little Nissan Murano. 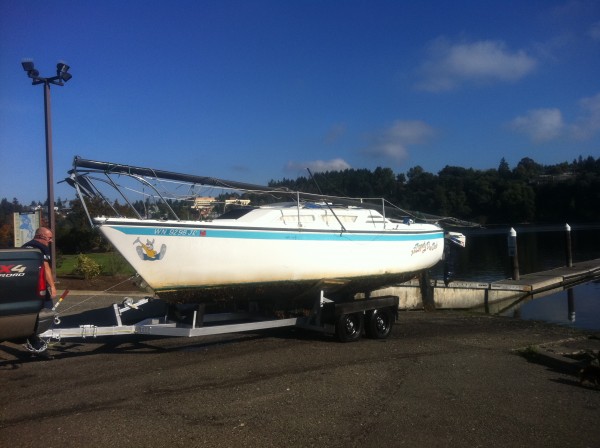 Just pulled Zippy out with Mike on the trailer in Bremerton

I posted previously about the condition of the hull. I am still incredibly amazed at the amount of growth on the bottom. 2 inch muscles so thick that the bottom could not be seen. No wonder I rarely broke 5 knots while sailing. 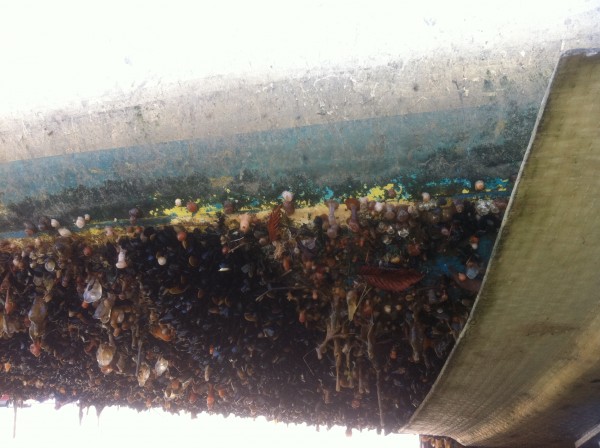 At Port Townsend Zippy got stuck in a sling and towed over to the pressure wash area. 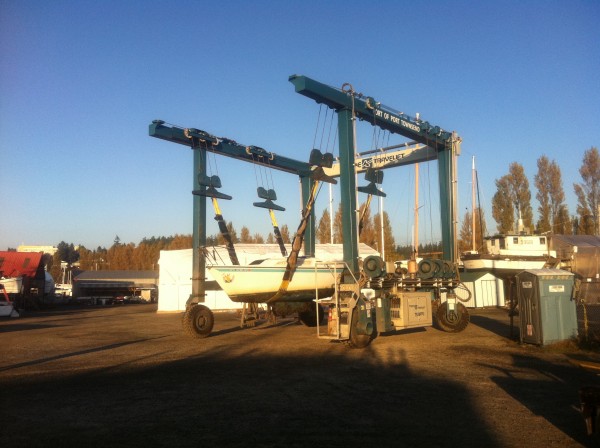 Zippy in the sling going to the pressure wash station

It took two people a half hour to clean up the bottom. I was very grateful to find that the growth had not done too much damage to the bottom. 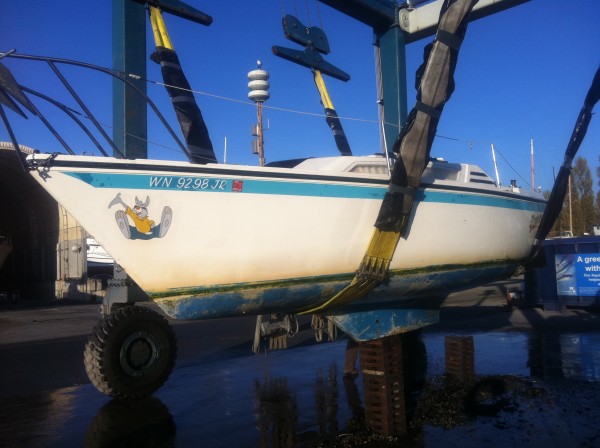 After a pressure wash bath 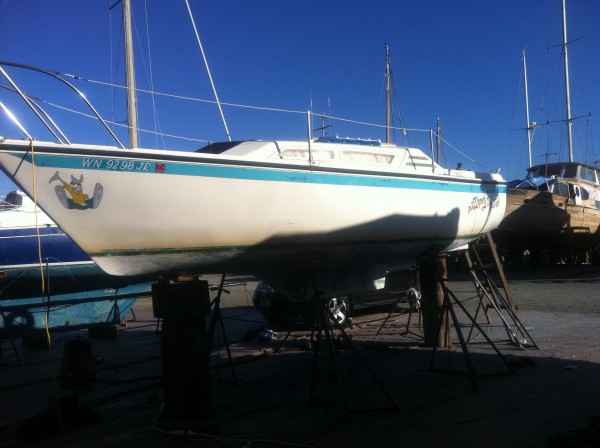 Zippy up on stands waiting to be sanded

From looking at the damage it seemed to me that Zippey ran aground at some point on the starboard side and took some major damage. Consulting with several other owners and workers in the boatyard confirmed this to me. I contacted two owners back and he said the boat was perfect when he sold it to the person I bought it from so I must assume he caused the damage and was not forth coming with me when I asked about damage. He does not respond to my contact attempts so I have been unable as of yet to determine what exactly happened. 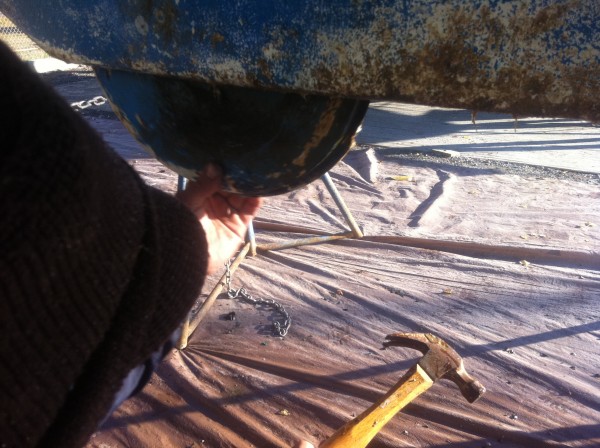 Pulling out the centerboard stub. The foam had expanded on impact and it was wedged in.

After many hours of sanding and achy weary arms, Zippy was finally in a condition to be prepped for the first coat of paint. 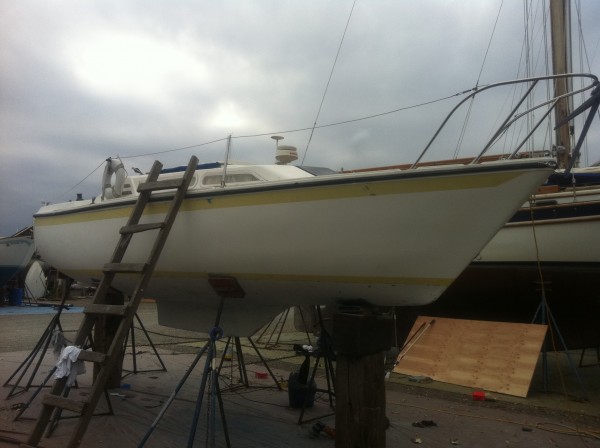 The weather started getting rough… A storm front was moving in so Zippy got a full tarp covering. It was very loud inside the boat at night with even a light wind moving the tarps around. 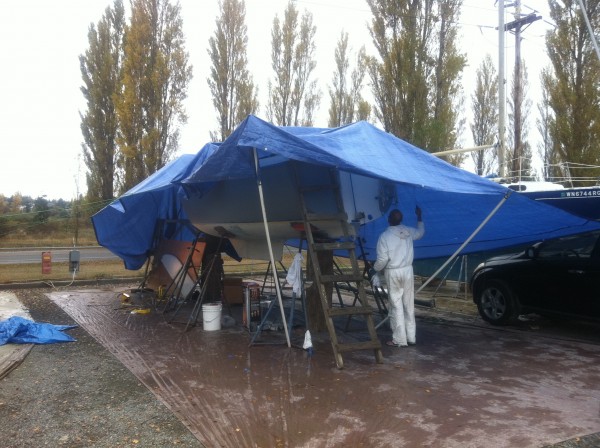 Protection from the rain

A new centerboard was fabricated from two ¾ inch pieces of plywood epoxied together. It was soaked in chemicals to make it resistant to the seawater then glassed. 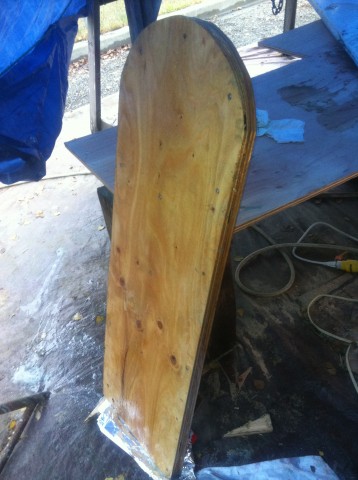 The first couple coats of color have gone on. The goal is a brushed metal bright silver with dark red accents. Turning out great so far. 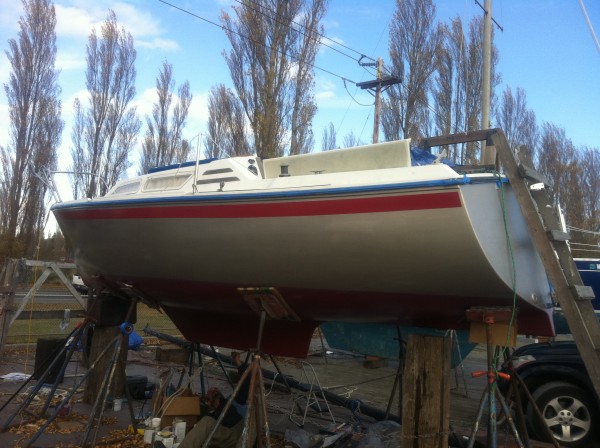 And finally, here is Zippy back in the water! The mast is not back up yet in this picture because it was getting dark, but she came out real pretty. 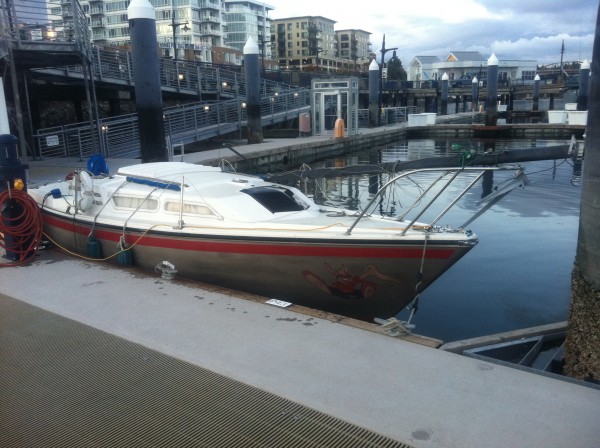 Zippy back on her moorage

One thought on “ZDD: Haul out for refit and painting”